Centuries ago, the area that would be the South Cotabato was sparsely inhabited by Malay pioneers which later evolved into various ethnic groupings that still exist in the province today. The Spaniards launched expeditions to subdue the area throughout the colonial era but they never gained control of the region until the middle of the 19th century after the Spaniards established a military post at what is now Barangay Tamontaka, one of the earliest Christian settlements founded south of the Philippines, in present-day Cotabato City. Spaniards already took with them Chavacano-speaking Christians and Muslims from Zamboanga and Basilan, as well as the Visayans, especially the Hiligaynons and Cebuanos.

The area of what is now South Cotabato and Sarangani provinces used to be part of Davao province until 1914, when the reorganization of the districts in Mindanao took place, thus it became part of the then-undivided Cotabato province. Settlers, who would lay the foundation of what would become a progressive province, started trooping down 1914.

The significant thrust occurred during the term of President Quezon in late 1930s. General Paulino Santos led the first of wave of settlers that time. After World War II, the final exodus of settlers from Luzon and Visayas poured into the area's virgin land.

In the early 1960s as population, trade and industries grew in southern part of Cotabato, a clamor of local self-governance arose. Thus, on July 18, 1966, South Cotabato was separated from Cotabato as an independent province. At that time, the province consisted of 11 municipalities, namely: Banga, South Cotabato, General Santos (now a city), Glan, Kiamba, Koronadal, Maitum, Norala, Polomolok, Surallah, Tantangan, and Tupi. These municipalities were established long before the creation of the province. Other component municipalities were formed after it fully functioned as a province.

With the creation of regions under Pres. Ferdinand Marcos, South Cotabato was grouped with Region XI, also known as Southern Mindanao, in 1975.

In 1992, the province of Sarangani was formed out of South Cotabato. Seven towns in southern and coastal section of the province (Malungon, Alabel, Malapatan, Glan, Maasim, Kiamba and Maitum) became part of the new province, leaving South Cotabato with 11 remaining municipalities.

Regional offices were relocated to South Cotabato in accordance with EO 429 dated October 12, 1990, issued by President Corazon C. Aquino during the expansion of the newly created Autonomous Region in Muslim Mindanao, and EO No. 36 dated September 19, 2001, issued by President Gloria Macapagal Arroyo which says South Cotabato is to be transferred from Southern Mindanao region to Region XII and having the city of Koronadal as the regional center of Region XII.

On August 16, 2000, Republic Act No. 8803 was approved, that converted the municipality of Koronadal into a component city of South Cotabato.

In 2015, the National Competitiveness Council declared the province as the 4th most competitive province in the country.

South Cotabato covers a total land area of 3,935.95 square kilometres (1,519.68 sq mi). When General Santos City is included for geographical purposes, the province's land area is 4,428.81 square kilometres (1,709.97 sq mi). The province is situated on the southern section of central Mindanao, bounded by the provinces of Sultan Kudarat to the north and west, Sarangani to the south and northeast, Davao del Sur to the far northeast, and the Sarangani Bay to the southeast. The province is generally flat dotted with some hills and mountains.

South Cotabato belongs to the fourth type of climate, that is rainfall is more or less evenly distributed throughout the year. The average number of rainy days for the year 2004 is recorded between 122 and 180 days with the months of May, June, July, August and October having the most occurrence. Air humidity generally follows closely the rainfall pattern. Humidity is highest during the period of June to October with 88% being recorded at the Tupi seed farm. The months of February and April have the lowest air humidity recorded at about 72%. Maximum daytime temperature throughout the province is in the range of 36 to 38 °C (97 to 100 °F), falling to 23 to 32 °C (73 to 90 °F) during the night depending on the elevation. The hottest period is January to April while July to December being the coolest. South Cotabato enjoys a mild, pleasant climate with no pronounced dry or wet season, and is practically typhoon-free.

South Cotabato comprises 10 municipalities and 1 component city. The highly urbanized city of General Santos is traditionally grouped with, but administered independently from the province.

* Highly urbanized city (geographically within but independent from the province) 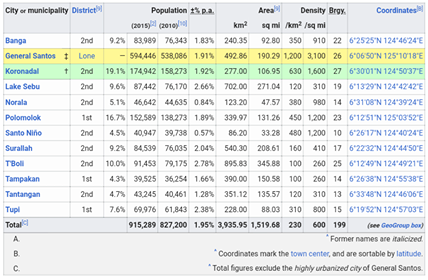 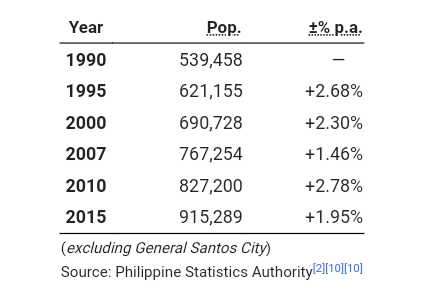 The people of South Cotabato have diverse heritages. Ethnic Hiligaynons, descendants of migrants from Panay and Negros in the Visayas who settled in the municipalities/towns of Norala, Banga, Surallah, Sto. Niño and the province's capital city, Koronadal, are the majority in the province. The province's major media of communication are Hiligaynon and English. On the other hand, people from the Ilocano-speaking peoples of Luzon settled in Tampakan, Tantangan and Tupi, and the Ilocano language may still be heard spoken in these towns. The Cebuanos are the main ethnic group of the municipality of Polomolok, and are one of the main ethnic groups of Tupi (along with the Hiligaynons and Kapampangans). Both towns are near to General Santos City, which speaks both Hiligaynon and Cebuano. Chavacano speakers are even found scattered in some areas of the province, as well as Maguindanaons. Tbolis mainly reside around the Lake Sebu area

Roman Catholics predominate the province with 65% adherence, while Islam is a minority religion which is 6% of the population. Other minorities are various Christian Churches such as Prostestants which form about 22% and consist of mostly evangelicals of the province's population which can be mostly found in some urban parts of the province. Iglesia ni Cristo forms about 3-4% population. The remainder are divided among Buddhist and animism.

The Maguindanao tribe is the major Muslim Filipino tribe in the province. Although many of them still wear their traditional costumes and practice their native customs, others have come to adapt the more liberal practices of their Christian neighbors such as wearing shorts and sleeveless shirts, eschewing the use of the headscarf, and attending dances/mixed gatherings. Other indigenous Filipino tribes are the T'boli and B'laan tribes in Lake Sebu and T'boli municipalities, famous for their brassworks, beadwork and t'nalak weave. The people of these tribes wear colorful embroidered native costumes and beadwork accessories. The women of these tribes, particularly, wear heavy brass belts with brass 'tassels' ending in tiny brass bells that herald their approach even when they are a long way off.

The people of South Cotabato retain many of the practices and traditions of their particular tribal heritages, although infused with a flavor that is distinctly Mindanaoan and the product of cultural interaction between the immigrants and the indigenous peoples of the area. One vivid example of this is the predominant use of the native malong, the colorful, tubelike garment used as a skirt by the indigenous tribes, in place of a blanket or sleeping bag.

Hiligaynon is the most widely spoken language in the province, followed by Cebuano, which is the majority language of General Santos. English is widely understood and is often used for administrative functions by the local government. Other languages spoken in the province are Tboli, Blaan, Maguindanao, as well as Kapampangan and Ilocano.

The common path most travelers and adventurers take when visiting South Cotabato is through General Santos City, a highly urbanized city famous for its yellowfin tuna landings.

The Philippines has a large number of regions, each boasting their own delicacy. But when we say food, South Cotabato delicacies are at par with those famous world-class cuisines. Why don't you grab a pen and paper and take note of these delicacies that you might want to get your tummy full of? 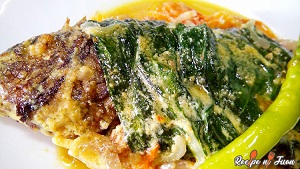 One of the delicious ways to prepare tilapia or any other fish is Sinaglay.

It is a way of cooking in South Cotabato where the fish is covered or wrapped in cabbage and cooked in coconut milk. 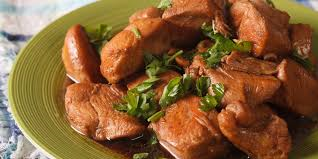 This one is not the ordinary adobo, not that I'm saying adobo is ordinary, but the chicken used in this dish has a different flavor from that of commercially raised broiler chickens. Cooking this dish in the most Filipino adobo-style is one of the most delicious ways to have it. 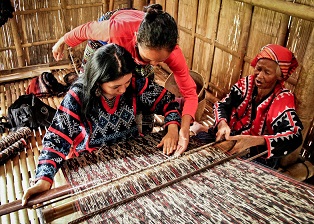 T'nalak weaving, undoubtedly hailed as the province's ultimate cultural emblem is a traditional masterpiece of geometric patterns dreamt to life by T'boli women, uniquely known as "Dream Weavers" who translate their dreams into intricate patterns of intensely colored abaca fibers. 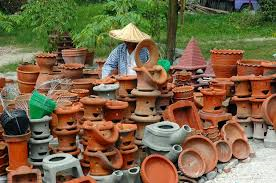 Itss not just big business but also small, family-owned enterprises that are flourishing in South Cotabato. In the town of Tantangan, families are involved in the local pottery business, most of which are simple, backyard operations some of which have been around for decades.

Armed with a potter's wheel, deft hands and with the help of their dutiful carabao which stomps on the clay to break it down, the small business has survived and thrived through the years. The finished products - flower pots, coal-fired stoves and jars - are displayed in stores along the highway. 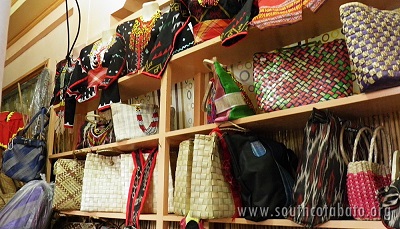 In the town of Banga, a biodegradable waste byproduct is transformed into bags, baskets, decor, mats and slippers. Who would've thought that corn husks could be made into a handicraft? Every week, up to 1,000 fathoms of corn husk twine are bought from rural households and made into different products. The profits benefit the senior citizens, women and youth, differently-abled persons and indigenous people in Banga.

South Cotabato is a haven of waterfalls, lakes, rivers, and mountains. It is known as the “Land of the Dreamweavers” since the T’Boli tribe, who specializes in weaving, originated and live here. It is also a province where you can find the Tuna Capital of the Philippines–the General Santos City. This place is truly a nature’s home. 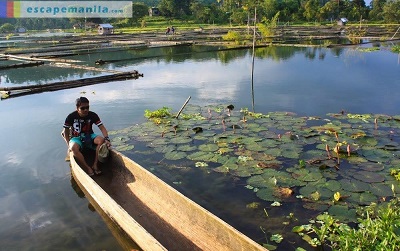 "A bowl of forests and mountains." That's how they described Lake Sebu in South Cotabato. With over 87,000 population, this municipality attracts more and more tourists every day. This is a town where you will find the most amazing falls, springs, rivers, and lakes in the province. About 7 total waterfalls can be found in this town, the water originating from Lake Seloton and Lake Sebu. 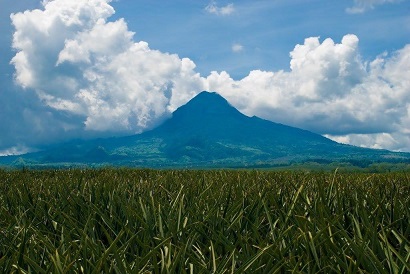 If you're looking for some physical activities, Mount Matutum is one of the top tourist spots in South Cotabato. This is a must-visit destination if you want a more natural experience. To protect this natural paradise, the government has built an ecotourism place within the vicinity of the mountain to make hiking as a regular activity. 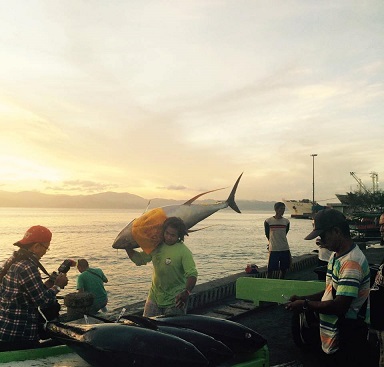 The Fish Port in Gensan City is kind of unique if you compare it to other tourist destinations. There's nothing much about this place except big tunas. Gensan City is known as the Tuna Capital of the Philipines, no doubt why it is called as such because of tons of fishes being caught here in just one catch. 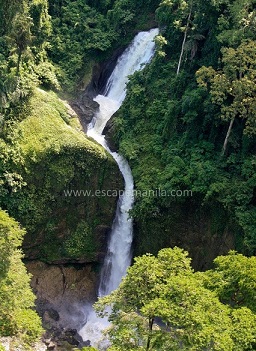 Located in Lake Sebu, you will find Seven Falls Zip Line Adventure as the most fascinating tourist attraction in South Cotabato. By visiting this place, you will have the chance to try the highest zip line in the country while watching over the 7 majestic falls of the town. 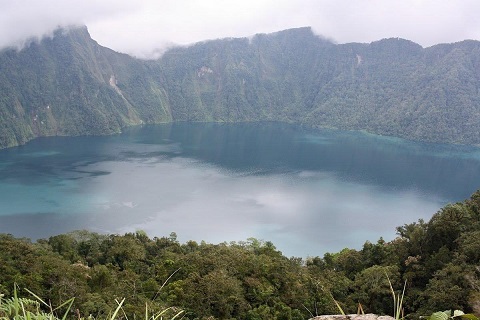 Lake Holon is situated in T'Boli and is one of the top tourist spots in South Cotabato. Tourists go to this lake for fun hiking and calm mornings. It is true that the ambiance here is so calm that you wouldn't want to home even after the sun sets. This destination will not only give you a perfect lake view but would also bring out the hiker in you as you walk along either of the Salacafe and Tule trails. 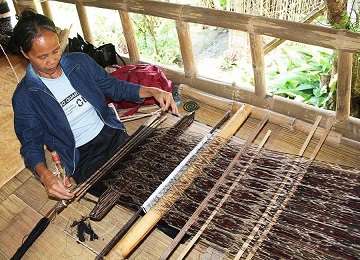 South Cotabato is also popular for T'nalak weavings. In fact, one of the National Living Treasure Awardee, Lang Dulay, lives here. This weaving center serves as a tourist spot where you can watch the members of the tribe weave their clothing and if you get lucky, you would be able to try weaving with them. 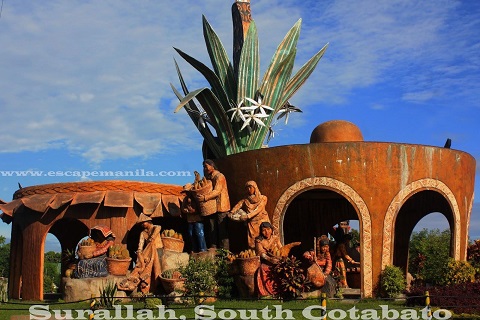 Last but not least is the Surallah Tri-People Monument, an artwork dedicated to the tri-people of Mindanao. It represents the Lumads (Indigenous People), Christians, and Muslims.