The earliest civilization in the province can be found in Maitum, Sarangani, where the Maitum Anthropomorphic Pottery or Maitum Jars were found. The jars have been dated to approximately 5 BC to 370 AD, one of the oldest in the entire Southeast Asian region and the Philippines. The discovery testified to the long history of cultural exchanges in Sarangani and its people.

Island of Sarangani (now part of Davao Occidental) was named by Spanish explorer Ruy Lopez de Villalobos in 1543 as Antonia, in honor of Antonio de Mendoza y Pacheco who commissioned the Villalobos expedition to the Philippines. The early inhabitants who first inhabited Sarangani were the indigenous natives, called MunaTo, a native term for "first people."

Sarangani covers a total area of 3,601.25 square kilometres (1,390.45 sq mi)occupying the southern tip of the SOCCSKSARGEN in central Mindanao. The province is bordered on the central-north by South Cotabato, northeast by Davao del Sur, east by Davao Occidental, south by the Sarangani Bay and Celebes Sea, and northwest by Sultan Kudarat.

Sarangani is divided into two (eastern and western) sections, separated by the Sarangani Bay and General Santos City in the middle. The western portion comprises the towns of Maitum, Kiamba, and Maasim, and is bounded on the north by South Cotabato and on the northwest by Sultan Kudarat. The eastern section consists of Alabel, Glan, Malapatan, and Malungon. 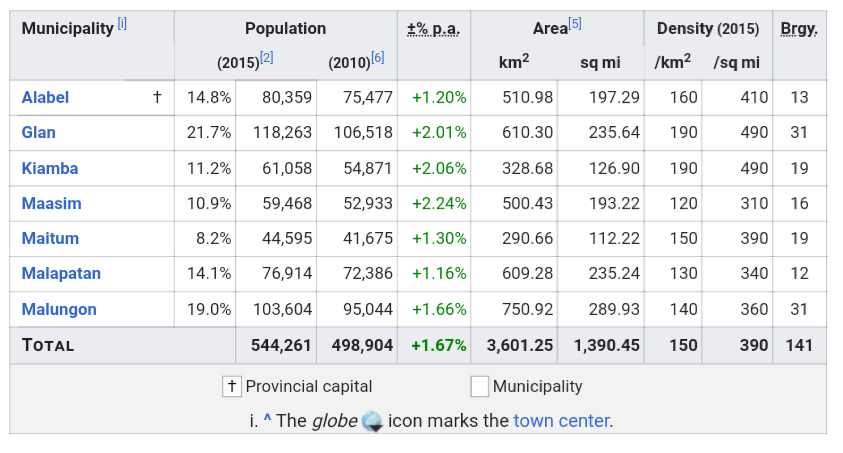 Christianity is the majority religion in the province with a total of 79% (48% Roman Catholicism and 31% evangelicals). Other religious minorities are Islam (9%) and Iglesia Ni Cristo (2%). The remainder is usually divided among other Christian churches. 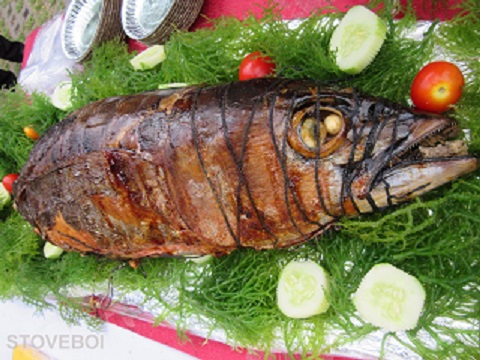 Tuna lechon of Sarangani Highlands Garden - The special packages include: the Gensan Tuna Food Tour, which explores the best product of the city through different offerings of several restaurants and hotels; Blaan Traditional Food Tour, a tour that immerses guests in the tradition and food of the Blaan Tribe; South Valley Food Tour, the tour that is all about the fresh fruits, which includes the abundant pineapple, that grows in the foothills of Mt. Matutum that covers Gensan and Koronadal City; Lake Sebu Culinary Experience, a territory of the T'boli tribe which is famous for its tilapia cuisine; T'boli Food Adventure highlights the traditional cuisine of the tribe; Halal Goodness that is all about the halal delicacies of Cotabato City and nearby areas; and the Gensan Agri Tour, which explores the bounty of the country's southernmost city.

Although I was not able to experience all the tour packages, I was able to sample some of the eats and sights the region is known for. 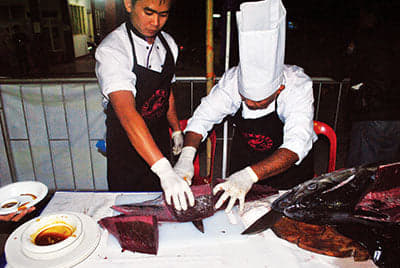 Deep into the wilderness, you can trek the remote Ayub Caves where anthromorphic burial jars of the precolonial settlers called “MunaToh” or first peoples, dating back to more than 2,000 years old, were discovered. The archaeological finds are on display at the National Museum, but a replica can be viewed at the atrium of at the Maitum Municipal Hall. Its moontainous terrain have made the domain of ethnic tribes such as Blaan, Tagakaolo, Tboli, Manobo, Ubo, and Kalagan who have been in the uplands for generations. Culture vultures can immerse with the B’laan communities at the Lamlifew Tribal Village Museum in Malungon, which can be reached in about an hour’s walk from the main road 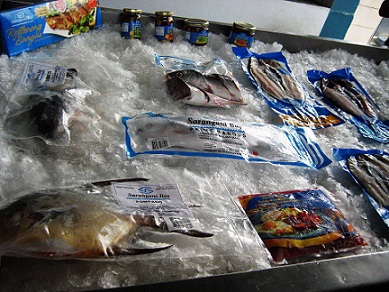 The tour started with a brief preview into the company profile, their subsidiaries, affiliates, brands, and products. Then, we proceeded to the processing area where we saw a gamut Sarangani Bay Products. There were various fresh frozen milkfish: whole, boneless, marinated, and chopped. There were also fresh frozen seabass and pompano.

This province has a total land area of 4,100.42 square kilometers, with a 230 kilometer coastline of white sandy beaches and mangrove forests. Sarangani is a town located at the southernmost tip of Mindanao, and was cut half way by General Santos City. It is bordered by Davao del Sur, Sultan Kudarat, and South Cotabato. It is also hugged by the Celebes Sea and Sarangani Bay making it the coastal zone of SOCCSKSARGEN. This province has 7 municipalities and 140 barangays. The capital city is Alabel. 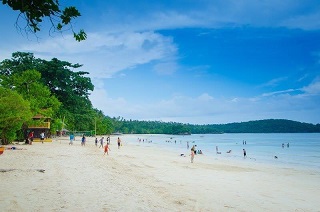