Limestone burial urns with myth-inspired patterns from Cotabato dating back 600 CE. Cotabato derives its name from the Maguindanao word kuta wato (from Malay - "Kota Batu"), meaning "stone fort", referring to the stone fort which served as the seat of Sultan Muhammad Kudarat in what is now Cotabato City (which the province derives its name from).

Islam was introduced in this part of the country in the later part of 15th century by Sharif Mohammed Kabungsuwan, an Arabo-Malay Muslim warrior-missionary. Sharif Kabungsuwan invaded Malabang in 1475, facing armed resistance from the non-Muslim natives, nevertheless successfully vanquishing and subjugating them to his (Islamic) rule through the might of his Samal warriors.

Modern historians have pointed to the Cotabato delta as the medieval location of Toupo, the successor of the Maguindanao/Cotabato Sultanate.

Christianity was introduced in 1596, but the Spaniards were unable to penetrate into the region until the second half of the 19th century. The district of Cotabato was formed in 1860, covering the areas of what is now Cotabato, Maguindanao and Sultan Kudarat provinces with its capital at Tamontaka. Fort Pikit was established by the Spaniards in 1893 as they continued their conquest of the remnants of Maguindanao Sultanate, which would soon be the site of one of the province's oldest towns, Pikit.

The coming of the Americans ushered in the creation of the Moro Province on July 15, 1903, through Act No. 787 of the Philippine Commission. Cotabato, covering what are now the provinces of Cotabato, Maguindanao, Sultan Kudarat, South Cotabato and Sarangani, became a district of the huge Moro province. During the American period, large companies were established in Cotabato to exploit the vast timber resources of the region. By the 1930s, settlers from Luzon and Visayas established homesteads in Cotabato. Further information: Moro Province and Department of Mindanao and Sulu

This section does not cite any sources. Please help improve this section by adding citations to reliable sources. Unsourced material may be challenged and removed. (April 2016) (Learn how and when to remove this template message) In December 1941, Japanese planes bombed and invaded in Cotabato. In 1942, Cotabato was occupied by the Japanese Imperial forces. The establishment of the military general headquarters of the Philippine Commonwealth Army was active on January 3, 1942 to June 30, 1946 and the Philippine Constabulary 10th Constabulary Regiment was active again on October 28, 1944 to June 30, 1946 and military stationed on Cotabato. Moro guerrilla fighters invaded around the province of Cotabato and help them of all local force of the Philippine Commonwealth Army and pre-war Philippine Constabulary 10th Constabulary Regiments by fought against the Imperial Japanese Army until 1944, the Moro guerrillas was retreating Japanese troops before liberated. In 1945, Cotabato was recaptured from the Japanese Imperial forces by the combined Filipino and American troops together with the recognized Moro guerrilla units. The guerrillas used the traditional Moro Kampilan, Barong and Kris swords.

Cotabato now comprises the capital city of Kidapawan and 17 municipalities.

By the aftermath of the plebisite to form the autonomous administrative region of Bangsamoro in February 2019, 63 barangays from Cotabato's western municipalities, all of which inhabited mostly by Muslim natives, opted to join the newly-formed region. This will result in the reduction of the number of barangays the province currently administers after the national midterm elections in 13 May 2019.

Cotabato covers a total area of 9,008.90 square kilometres (3,478.36 sq mi) occupying the northeastern tip of Region XII and is centrally located in Mindanao. It is bounded on the north by the provinces of Lanao del Sur and Bukidnon, on the east by Davao City and Davao del Norte, on the west by Maguindanao and on the southeast by Sultan Kudarat and Davao del Sur.

Cotabato is strategically linked to the major "Arterial Road System" that traverses and connects the province to Davao City - SOCCSKSARGEN - Cotabato Corridor. The Cotabato via Kabacan - Maramag - Kibawe, Bukidnon Sayre Highway meanwhile serves as its link to the Cagayan de Oro-Iligan City Corridor.

Cotabato stretches from the east at Mount Apo, which separates it from Davao, to the Piapayungan Range on its boundary with Lanao in the west. Between these highlands is the basin of the Pulangi River or Rio Grande de Mindanao, the second longest in the Philippines at 373 kilometres (232 mi), which rises in Bukidnon and flows south to Maguindanao and Illana Bay. The province's fertile plains are traversed by tributaries of this great river.

Typhoons do not pass through Cotabato and rainfall is evenly distributed throughout the year.

Cotabato comprises 17 municipalities and one city. 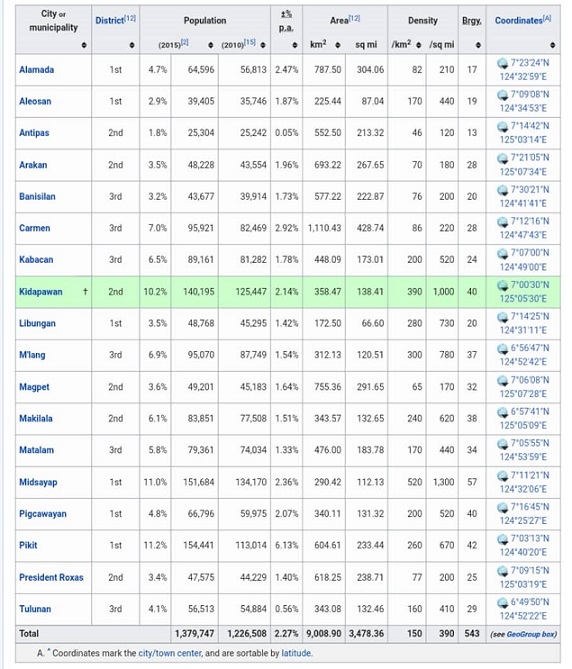 During the 2001 Referendum for inclusion to the Autonomous Region in Muslin Mindanao, 2 out of 28 barangays of Carmen, Cotabato chose to be part of ARMM, but were excluded because they are not connected to the main region of ARMM. During 2010-2016 Administration, the Bangsamoro ideal sprouted and a newly proposed region was in the making. According to the agreements signed by the Moro Islamic Liberation Front and the Administration of Noynoy Aquino, Carmen will be included in Bangsamoro because of the two out of twenty-eight barangays that voted in favor of joining the Muslim region back in 2001. Unfortunately, Bangsamoro was not implemented before the term of Aquino ended. Despite this, the current administration aims to establish a Federal Government, where Bangamoro will be realized into a State of the Philippines wherein Carmen will be included in Bangsamoro.

Plans to establish a new municipality in the south of Carmen so that the indigenous and Christian central and northern part of Carmen will be retained in North Cotabato has yet to be confirmed. The idea arose because once the entire municipality of Carmen is included in Bangsamoro, the province of North Cotabato will be cut into half, leaving three towns (Banisilan, Alamada, and Libungan) at its west without connection to the center of North Cotabato, isolating these towns in the process.

The issue was partially resolved when the second part of the plebiscite was conducted on 6 February 2019, when 63 barangay from the towns of Pigkawayan, Libungan, Midsayap, Aleosan, Carmen, Banisilan and Pikit opted to join the new administrative autonomous region of Bangsamoro after the results of the region's formation plebiscite were confirmed three days later on 9 February. However, these barangays are only to join the adjacent province of Maguindanao as parts of the said province's nearby and respective municipalities or to cluster on their own as new municipalities within the said province after the national midterm elections in 13 May 2019, and only then would the size and population of Cotabato province would truly diminish as the leaving barangays would no longer officially be parts of the province. 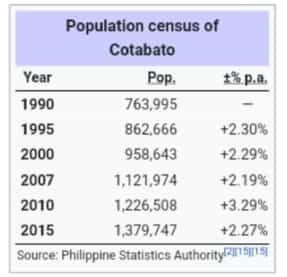 Cotabato is an ethnoliguistically diverse province. The first Visayan settlers reached the town of Pikit in 1913, and since then, Christian migrants have moved and lived in Cotabato, cohabitating the province with the local indigenous groups. 71% of Cotabato's population descended from settlers who migrated from the Visayas and Luzon, while the remaining 18% belong to the communities of Magindanaons, Iranuns, Ilianens, Dulangan Manobo, Obo, Tagabawa, and Tboli. The major languages spoken are Hiligaynon (46%), Maguindanao (38%), Cebuano (8%), and Ilocano (4%). 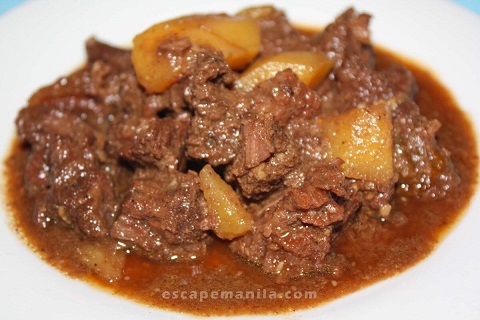 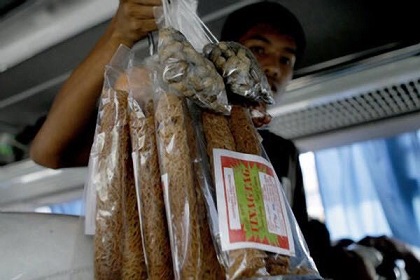 Here the most popular native delicacy is the baye-baye. It is made from coconut water, grated scraped young coconut meat, sugar and toasted pinipig (pounded rice grains).

Vendors greet bus or jeepney passengers with baye-baye. Unlike the baye-baye in Iloilo that are wrapped in banana leaves, those in Pigcwayan are wrapped in red Japanese paper. Ilonggos in Pigcawayan are the known makers of this sweet native delicacy. 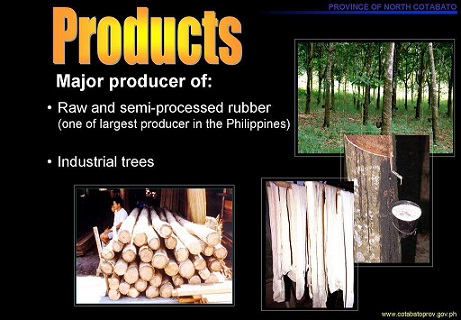 Conquer the highest peak in the Philippines: Mt. Apo . This majestic mountain is also a home of the endangered Philippine Eagle, the country’s national bird. Mt. Apo is surrounded by moss-covered century-old trees, captivating flora and fauna, sulfur crater and massive boulders. It is one of the most popular summer destinations in Mindanao.

Mt. Apo, with a total land area of 72,769 hectares of tropical rainforest, is declared natural park. It has an elevation of 2,956 meters above sea level.

Be captivated with the unique 140-meter wide curtain-like springfalls, feel the breeze of nature that could rejuvenate adventurers. Asik-asik, which is now the most popular destination in the region, is a perfect place for nature lovers.